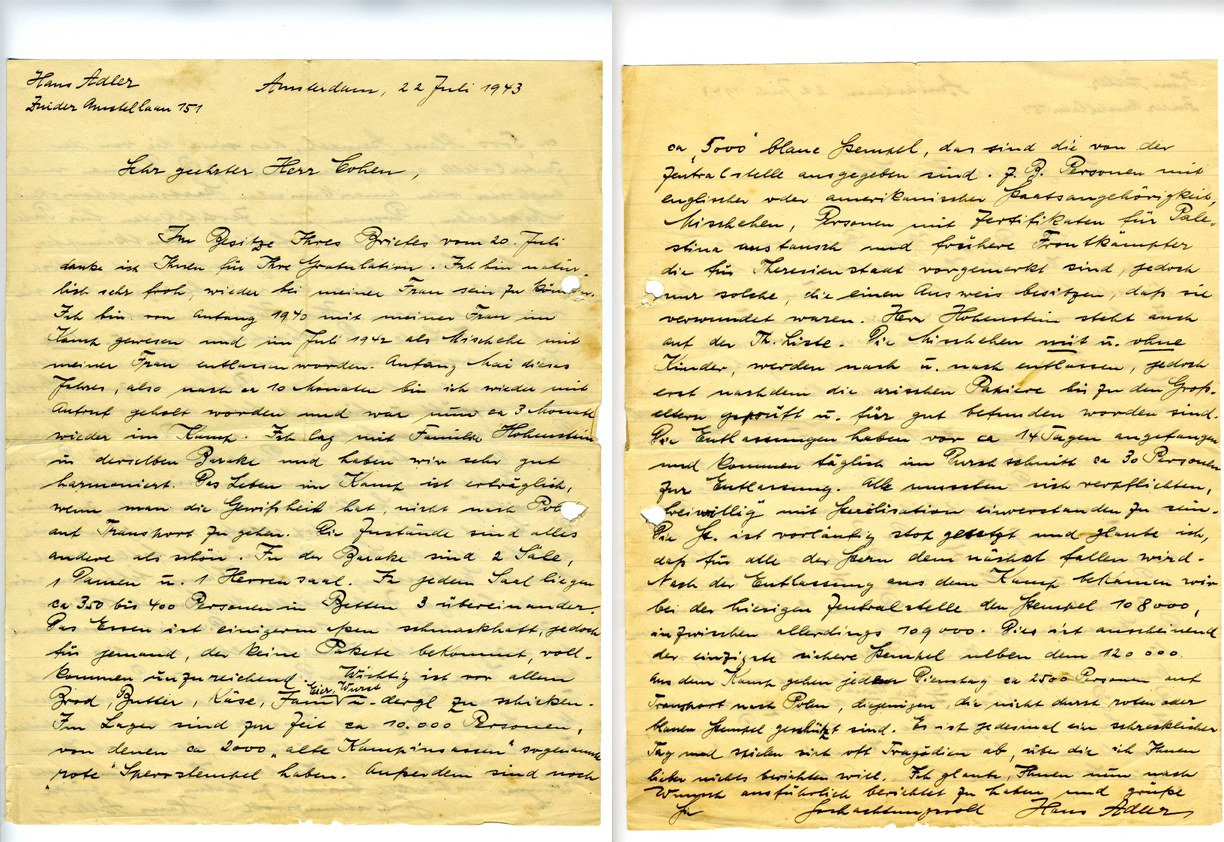 Thank you for your letter with the congratulations.
I am of course very glad to be with my wife again. From the beginning of 1940 I stayed with my wife in the camp ( Westerbork ) until my release in July 1942 by reason of  my mixed marriage.
At the beginning of this year – after about 10 months – I was summoned again and I stayed another 3 months in the camp.
I stayed in the same barracks as the family Hohenstein and we were very well matched.
Life in the camp is bearable as long as one is sure not to be sent to Poland.

The situation is anything but nice; every barrack has two rooms; one for ladies and one for gentlemen. In every room are 350 beds; three above each other.
The food is somewhat tasty, it is however, for someone who does not receive food parcels, totally insufficient. It is above all important to send bread, butter, cheese, jam, eggs, sausages and such.
At this moment there are in the camp about 10.000 people; 2000 of them are “old hands” who have a red “Sperr” stamp.
Besides these, 5000 have a blue stamp distributed by the Main Office. They are, for instance people of English or American nationality, mixed marriages, people with an exchange certificate for Palestine and former front soldiers, who are on a list  to go to Theresienstadt; however only those who can prove they were injured during  the war.  Mr. Hohenstein is also on that list.
The mixed marriages, with or without children, are gradually released, but only after the Arian papers are examined until the great parents and are found to be correct.
The releases started about 14 days ago; about 30 people daily are released. All of them are obliged to agree to a “voluntary” sterilization.
This sterilization has temporary come to a stand still.  I believe that subsequently all these will loose their star.
After the release of the camp we received from the Main Office here the stamp number 10.800; it will be 109.000 by now. It seems that this is the only safe stamp, besides the 120.000
Every Tuesday about 2500 people, who are not protected by a red or a blue stamp,  are transported from the camp to Poland. That is every time a terrible day; it is a tragedy I do not want to describe.
I believe to have reported to you in detail, as you wished.